There are enlarged copies below.

There is also and Excel File Copy also below 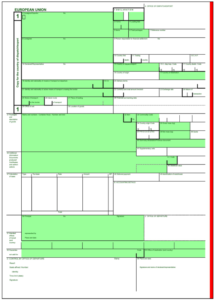 The above is a copy of the paper standard administrative document (first copy only).  The following is larger copy broken into three parts, to aid legibility.  In practice, it is completed online. 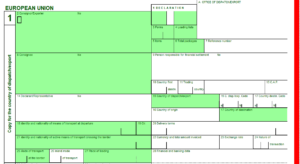 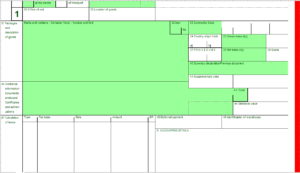 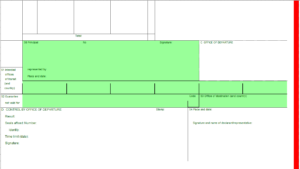 The forms and continuation forms used comprise the copies needed to complete the formalities relating to one or more customs procedures, taken from a set of eight copies:

— copy 1 is kept by the authorities of the Member State in which export (dispatch) or Union transit formalities are completed,

— copy 3 is returned to the exporter after being stamped by the customs authority,

— copy 4 is kept by the office of destination upon completion of the Union transit operation or as the document providing evidence of the customs status of Union goods,

— copy 5 is the return copy for the Union transit procedure,

— copy 6 is kept by the authorities of the Member State in which import formalities are completed,

— copy 8 is returned to the consignee.

Various combinations are therefore possible, such as:
— export, outward processing or re-export: copies 1, 2 and 3,
— Union transit: copies 1, 4 and 5,
— customs procedures at import: copies 6, 7 and 8.

In addition, there are circumstances in which the customs status of Union goods in question has to be proved at destination. In such cases copy 4 should be used as a T2L document.

Operators may, if they wish, use privately printed subsets combining the appropriate copies, provided that they conform to the official specimen.

Where declarations are to be processed by computer, use may be made of subsets taken from sets in which each copy has a dual function: 1/6, 2/7, 3/8, 4/5.

In this case, in each subset, the numbers of the copies being used must be shown by striking through
the numbers, in the margin of the form, referring to the copies not being used.

Every such subset must be designed so that the particulars which have to appear on each copy will be
reproduced by means of chemical treatment of the paper.

The forms contain a number of boxes only some of which will be used, depending on the customs procedure(s) in question.

Note that the status listed below have no bearing on the fact that certain particulars are collected only where circumstances warrant it. For example, the supplementary units in box 41 (status ‘A’) will only be collected where required by the TARIC. 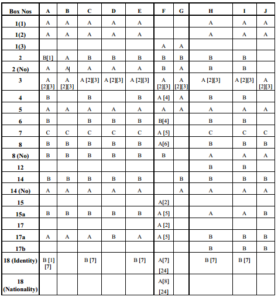 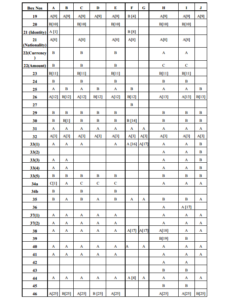 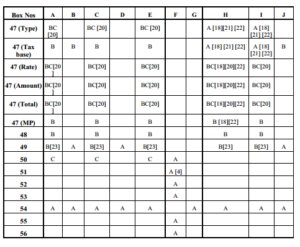 C: Re-export after a special procedure other than the customs warehousing procedure  31

I: Placing of goods under inward processing or temporary admission   51,53,54

Symbols in the cells

C. INSTRUCTIONS FOR USE OF THE FORM

Whenever a particular subset contains one or more copies which may be used in a Member State other than the one in which it was first completed, the forms must be completed by typewriter or by a mechanographical or similar process. For ease of completion by typewriter the form should be inserted in the machine in such a way that the first letter of the particulars to be entered in box 2 is placed in the position box in the top left-hand corner.

Where all the copies of a subset are intended for use in the same Member State, they may be filled in legibly by hand, in ink and in block capitals, provided that this is allowed in that Member State. The same applies to the particulars to be given on the copies used for the purposes of the Union transit procedure.

The form must contain no erasures or overwriting. Any alterations must be made by crossing out the incorrect particulars and adding those required. Any alterations made in this way must be initialled by the person making them and expressly endorsed by the competent authorities. The latter may, where necessary, require a new declaration to be lodged.

In addition, the forms may be completed using an automatic reproduction process instead of any of the procedures mentioned above. They may also be produced and completed by this means on condition that the provisions concerning the specimen forms, format, language used, legibility, absence of erasures and overwriting, and amendments are strictly observed.

Only numbered boxes are to be completed, as appropriate, by operators. The other boxes, identified by a capital letter, are for administrative use.

Without prejudice to general remark 2, the copies which are to remain at the office of export/dispatch or departure must bear the original signature of the persons concerned.

The lodging with a customs office of a declaration signed by the declarant or his representative shall indicate that the person concerned is declaring the goods in question for the procedure applied for and, without prejudice to the possible application of sanctions, shall be held responsible, in accordance with the provisions in force in the Member States, in respect of:
— the accuracy of the information given in the declaration,
— the authenticity of the documents attached,
— the observance of all the obligations inherent in the placement of the goods in question under the procedure concerned.

The signature of the holder of the procedure or, where applicable, his authorised representative commits him in respect of all particulars relating to the Union transit operation pursuant to the provisions on Union transit laid down in the Code and in this Regulation and as listed in section B above.

As regards Union transit formalities and formalities at destination, it is in the interests of each person intervening in the operation to check the contents of his declaration before signing it and lodging it with the customs office. In particular, any discrepancy found by the person concerned between the goods which he is

to declare and any particulars already entered on the forms being used must immediately be reported by that person to the customs authority. In such cases the declaration must then be made out on fresh forms.
Unless Title III provides otherwise, a box that is not to be used should be left completely blank.

Important Notice- See the Disclaimer and our Term of Use above Brexit Legal, McMahon Legal and Paul McMahon have no liability arising from reliance on anything contained in this article nor on this website